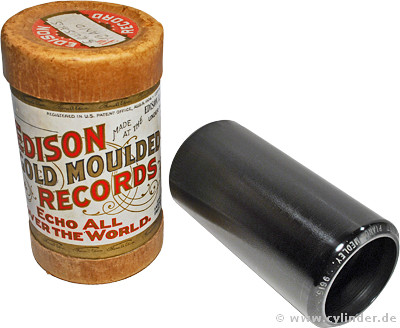 Gold Moulded cylinders, also called Moulded Records by other brands are the most often found cylinder types and were first introduced in 1902 by the Edison Phonograph Co. This new record type was made possible by a recently developed molding process for mass (re)production of pre-recorded cylinders. Edison had used this method already four years earlier for internal reproduction of master cylinders. With the new gold Moulded records, each single cylinder offered to the public was now made this way.

The manufacture of a gold moulded cylinder started as usual with the direct (master) recording on a cylinder blank made from soft brown wax. Then, this cylinder would not be duplicated by the common pantographic method but was used to derive a metal master from it. For this, the recorded cylinder was placed between two gold leaf electrodes and was then brought into rotation. Now, a high voltage was put between the gold electrodes, which caused to leave a wafer-thin gold layer on the record's surface. This thin gold layer could then be strengthened with copper by the use of standard galvanic procedures. No further involvement of gold occurred during the whole production. The master cylinder did not survive the metal mould production.

This way, one would get metal master mould from which it was possible to cast playable wax cylinders. But normally, these Moulded cylinders would be used to produce second-generation metal sub-moulds to meet the necessary production capacities.
Thanks to the new molding method, only one single recording had to be used from now on. Thus, the cylinder that a customer would now buy was not anymore directly recorded or pantographed and already features the very same grooves of the original master cylinder. An important benefit of this technique was that it allowed the use of a harder wax composition usually not suitable for direct recording. The new harder wax was given a black color and Edison introduced the new Model C reproducer at about the same time. This reproducer had did not have a fully round shaped bullet sapphire but look like tiny doorknob. The resulting smaller elliptical contact surface did allow the stylus to follow the shape of the more accurately. However, the new and heavier fishtail weight was even more substantial for the slightly better playback quality.

Until 1904, Edison's Gold Moulded cylinders did not feature a title end. They were only distinguishable by their embossed Edison logo, patent note and individual catalog number beside the grooves. In 1904, the end of the cylinder was change to a beveled edge that would feature the recorded title in white letters on the cylinder. The Columbia Phonograph Company did follow quite soon with their own molded cylinders that were made until 1904 by the use of the regular brown wax and later changed to black wax composition. To the current state, it is not fully backed weather Edison or Columbia did introduce the first molded pre-black wax cylinders to the market.

With the introduction of the 4-minute cylinder, the 2-minute cylinder did loose a good portion of importance and Edison discontinued its production by September 1912. Columbia had already decided to step out of cylinder manufacture in 1910 to focus on the effectively promoted disc record format.

Other labels existed in a huge variety in Europe beside Edison Columbia. Germany's most active cylinder brands were Gloria and Excelsior while England most widely spread with Edison-Bell and Sterling Records. France, however features Europe's largest phonograph company, the Pathé Fréres which stepped out of cylinder business as early as 1906 - after only 10 years. 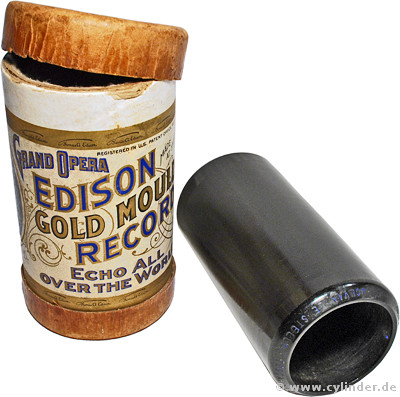 Black wax cylinders have a tougher surface than their brown wax antecessors, but the material is significantly brittle and breaks much easier.

The use with an old phonograph should be also reduced to a necessary minimum. Especially high volume cylinders are pretty quickly affected by distorsion. Digitization with the help of low-weight modern pickup systems can be again very helpful in this case.

However, any acoustic playback of any wax cylinders at a temperature exceeding 25°C (77 °F) should be absolutely avoided as wear may increase significantly.

Only suitable reproducers must be used with gold moulded cylinders. In general, the Model B reproducer does also work with these cylinders. Even though the widely spread Model C reproducer was developed to be used for black wax cylinders, it may cause quicker wear to the record than the earlier Model B does. This is mostly caused by the doorknob shape of the stylus, which literally files down a dynamic groove, thus causing distortion. Already affected grooves can be usually recognized by their brown shine.

With very few exceptions, the general playback speed is 160rpm. 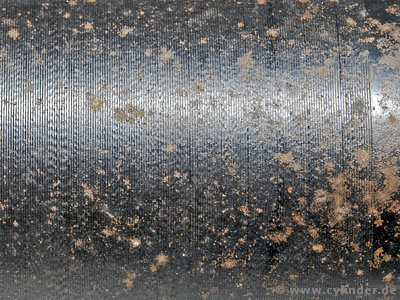 Severe destruction by mold is a well-known problem than can affect all kinds of wax cylinders. Mold growth is often caused by humid conditions like microscopic amounts of collected water inside a cylinder box, caused by ordinary "basement/barn/attic climate". The destructive effect is then done by the fungus, which eats the wax, usually starting at the surface where groove was cut. The remains can be easily called a microscopic lunar landscape. During playback one can hear a distinctive, scratchy and hissing noise. Normally the mold is already dead and cannot be reactivated. However, spores tend to be always in the air and therefore, a cylinder should be given enough ventilation during storage. This can be easily accomplished by not closing the box with a lid. Just leave it loose on the top. Alternatively, a tight-closed closed can be used together with a small package of silica gel to avoid growing humidity. Mold affection can be easily determined by visual inspection. Usually, it appears as white or light-brown spots of various sizes. Heavy mold affection can also include the full surface of a wax cylinder. Cylinder storage at normal living room climate is generally not a problem. For very special cylinder records, acid-free archival storage boxes are available. Bear in mind that these archival boxes are under no circumstances appropriate for transportation or any kind of shipping.

Rapid temperature changes must be avoided in any case; otherwise it may cause hairline cracks and an economically total loss of a record. Never touch the groove surface of any wax cylinders as even invisible fingerprints can react with the wax composition over months and will cause disturbing spots (not to be mixed up with mold). These spots cannot be removed.