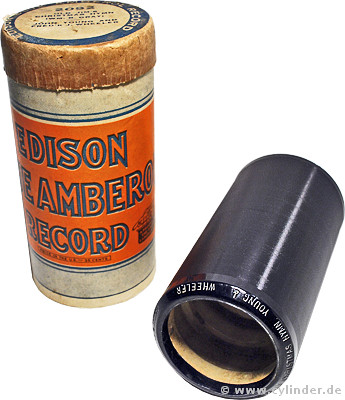 Shortly after the introduction of the 4-minute wax Amberols, the disadvantages of quick wear came out quite clearly and were the major reason for further technical progress of Edison's 4-minute cylinders. The goal was to accomplish a cylinder that could stand countless numbers of playbacks while being robust in handling. This goal was reached with the introduction of the new so called "Blue Amberol" cylinders in 1912.
Celluloid cylinders had been around for more than a decade, but could not be offered by Edison because of valid patents. Because of nonexistent license, Edison was not allowed to use celluloid for his own cylinders. It was not prior to 1912 when Edison received the patents, formerly owned by the bankrupt Lambert Company of Chicago. Other companies such as Columbia or US Everlasting had already licensed their products and mass-produced their "Indestructible" celluloid records since about 1908.

Edison had also experimented with alternative materials such as shellac, which did not proof to be of suitable quality. An experimental 8-minute cylinder never left the laboratory.

Each manufacturer of celluloid cylinders had its own celluloid cylinder modification where most designs were attended to handle the shrink problem. This was a known issue because of the Lambert cylinder that would not fit the mandrel anymore. Also Edison did use an inner core that would support the outer celluloid tube. Instead of cardboard and metal, Edison molded a plaster of paris core into his own Blue Amberols, which gave an excellent strength to the cylinder. Without any doubt, plaster was much cheaper than a rather complex composite material.

At the same time, Edison stopped the production of his 2-minute cylinder records. Only very few remaining brands produced these records for some additional few years. The Blue Amberols were fully compatible with the established 4-minute phonographs, but were unequally tough. With the introduction of the Blue Amberols, the common (wax) Amberols were instantly cancelled. Many of the by then issued titles were re-released on Blue Amberol, while being manufactured from the same masters. Therefore, similar titles and takes of recordings made between 1908-1912 can be found on both types of cylinders.

The early Blue Amberol cylinders were made with a flat title end, just like their wax counterparts. From 1913 on, the Blue Amberols were then made with a beveled edge, as it had been common with the 2-minute wax cylinders. 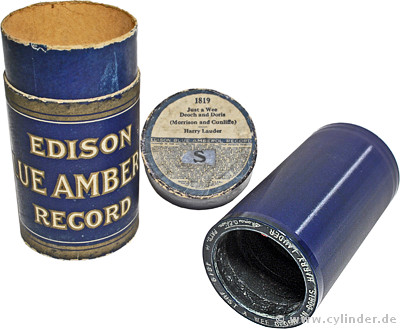 In 1914, the Edison cylinder recording studio was fully destroyed by a fire. Even the cylinder lover Edison realized, that the cylinder format had been widely overtaken by the disc and was a recessing product. Just one year earlier, Edison had introduced his own disc format, called the "Diamond Disc". Therefore it was decided to record any future releases exclusively on Diamond Disc and take acoustic copies to the cylinder. The copying procedure was conceivably simple and was done by a technically crude horn-to-horn method. This method would be slightly modified over the years with the remaining principle. Only the very last Blue Amberol titles were electrically dubbed from the respective Diamond Discs.
Because of the acoustic dubbing procedure, the sound quality began to suffer. These problems can be mostly heard through the 4000's numbers by their annoying mid-range resonance. In England, customers began to use the word "Damnberol", a straight relation to the poor sound quality. The dubbing process can be often heard by the engaging surface noise of the beginning Diamond Disc and also often after the selection is ended.

In 1919, the Royal Purple Amberol series was introduced to carry more "sophisticated" selections. These records had a deep purple color but were otherwise of similar quality. But also here, the content was approved and selected by Mr. Edison himself who chosed the songs by his personal musical taste. That is why beside some better classical selections even American folk songs can be found on this series. The Edison Phonograph Co. shut down its business in 1929 but made Blue Amberols until that same year. 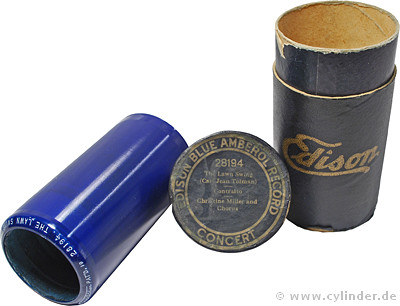 Blue Amberols are generally robust and durable. However, they are highly susceptible to humidity and low temperature. The inner plaster of paris core collects moisture of a long time period and slightly starts to swallow. As a result, the cylinder may not fit 100% on the mandrel. This problem can be solved by using a special reaming tool, usually made from wood or hard rubber that is equipped with one or more stripes of sand paper. A swollen Blue Amberol can be trimmed that way within a few minutes.
Low temperature can be a high risk of breakage, as the celluloid will become significantly more brittle, especially in combination with any shock exposure. Additionally, the celluloid has become more brittle because of the shrink effect. Because of the steady plaster core, the celluloid has no way to shrink and remains in the same size. But this has put more tension to the celluloid and can be the result for small cracks on both ends, which usually not go into the grooves. However, under unfavorable conditions, these cracks can grow into the recorded area and finally destroy the whole cylinder. This can be avoided through regular checking. A crack can be secured by drilling a tiny hole into its end; this will prevent the crack from extending.

Unless with the wax cylinders, feel free to touch the grooves of a celluloid record. However, it should not be done regularly to avoid unnecessary cleaning.

For the use with an Edison phonograph, use a Model H, K, S, R or O reproducer. The playback with a Diamond type reproducer as mostly used with Amberola phonographs is also possible. The standard playback speed is 160 rpm, but may vary because of some sloppy dubs at the wrong speed. For example, the Blue Amberol #5430 was actually recorded at 152.5 rpm and will sound unnatural when being played at regular speed.