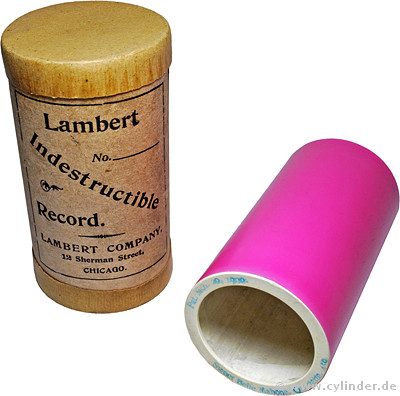 Pink colored celluloid cylinder by the Lambert Company of Chicago, ca. 1900
In 1900 Thomas B. Lambert was granted a patent that described a way of mass production of cylinder records. The basic principles came quite close to Edison's gold molding process, a new feature that he started to use in 1898 for internal master cylinder production. The most significant difference was the use of celluloid instead of wax. It had been previously used by Henri Lioret in France who had started in 1893 to successfully produce celluloid cylinders in his own format. However, Lambert was the first to produce Edison-compatible celluloid cylinders. For this purpose he founded the Lambert Company of Chicago, which held recording studios and factory plants. Over a few years the cylinder colors changed from beige, pink, blue and brown to black. The basis was always the beige celluloid that was then covered with a colored dye to reduce surface noise. These cylinders consisted completely of celluloid and had no additional inner core. The next significant modification was the reduction of used celluloid, an expensive material in those days, which made cylinders thinner and also lighter as their predecessors.

The unusual pink color was likely not a good sales argument and might have been to reason for the following changes over brown to black, because all other period cylinder were made from brown and later black wax. It is known that in the US several pink cylinders were recycled by the factory and then equipped with a black dye over the pink. Brown Lambert cylinders were only made for a very short time and were made from completely solid-colored brown celluloid. The last Lambert cylinders were black (sold under the name "Ebony"). Many of them featured an inner core made from pressed cardboard.

Albeit its technical success, Lambert's company did only exist for about six years as Thomas A. Edison was bent to legally shut Lambert off and secure his own phonographic supremacy. The result was a series of expensive lawsuits, which Edison nearly all lost. Nevertheless, Edison was very aware of the advantages of celluloid but Lambert's patents remained active and he stuck to his fragile wax material.

The most important Edison vs. Lambert litigation was because of the cylinder's compatibility to the mandrels of Edison phonographs. Edison claimed that Lambert was infringing his patents because of that format use. The court did not follow his point of view as Lambert cylinders did have an inner conical form but were totally straight and only touched the phonograph mandrel with each edge.

Patent showdowns were not a real problem in Europe were Lambert started a joint venture with the British Edison-Bell Company to have his indestructible cylinders sold as "Edison-Bell Indestructible Records", followed also by a continental sales subsidiary in Hamburg, Germany.

However, the expensive legal conflicts had taken Lambert's Company bankrupt. Edison may not have legally won this fight but certainly won it economically. In 1912 Edison was finally allowed to use celluloid for the production of his own cylinders and immediately released his brand-new and Edison-innovative Blue Amberols.

Lambert cylinders are playable with virtually any 2-minute cylinder phonograph and normally do not require extra care as wax cylinder do. However, they are not indestructible at all! Especially black Lamberts are highly susceptible to cracks and breakage while being exposed to physical stress. Generally do always avoid forcing any cylinder on the mandrel in case it does not fit!

The dye-colored cylinders seem to be furthermore vulnerable to sunlight and, like Blue Amberols, tend to bleach over period of daylight exposure! Therefore it is recommended not to leave such cylinders in any open display. Lambert cylinders in open boxes should be kept in a dark place or closed with a proper lid to avoid any fading. Please note that general colors tend to vary due to conditions of production. An overall seamless but light-colored is no evidence to have 'sunbathed'.

Lambert cylinders bear the serious risk of shrinkage. Because pure celluloid is too inflexible, camphor was added to the composition as a softener. However, camphor tends to evaporate from the celluloid, even after 100 years. As a result, these cylinders shrink and are getting constantly smaller in length and diameter. Practically, this means that most Lambert cylinders will not fit a standard mandrel anymore or only partially. Do not apply any force to the cylinder as this may easily cause the record to crack.

In most cases there is a possibility to fix this problem by using fine sandpaper (#600 or #1000) and gently ream the inner edges. When doing this it is highly recommended to verify in short intervals to insure that only the necessary amount of celluloid will be taken off. Never use a reaming tool intended for Blue Amberols as the applied sandpaper is too grainy for Lambert cylinders and can easily cause cracks. Be aware that you may have to ream a Lambert cylinder again after about 5 years of normal storage.

Some Lambert cylinders are found shrunken that much that an ordinary Edison reproducer will not be able to touch the cylinder's surface anymore. In this case a modern electric playback system or the use of a different phonograph (such as a Columbia Graphophone) is recommended.
© 1998-2020 by Norman Bruderhofer